A theatrical event, an artistic journey into the world of counterculture, a reflection on humanity signed by a great master of the scene.

in Polish with Italian and English surtitles

The show is recommended for an adult audience 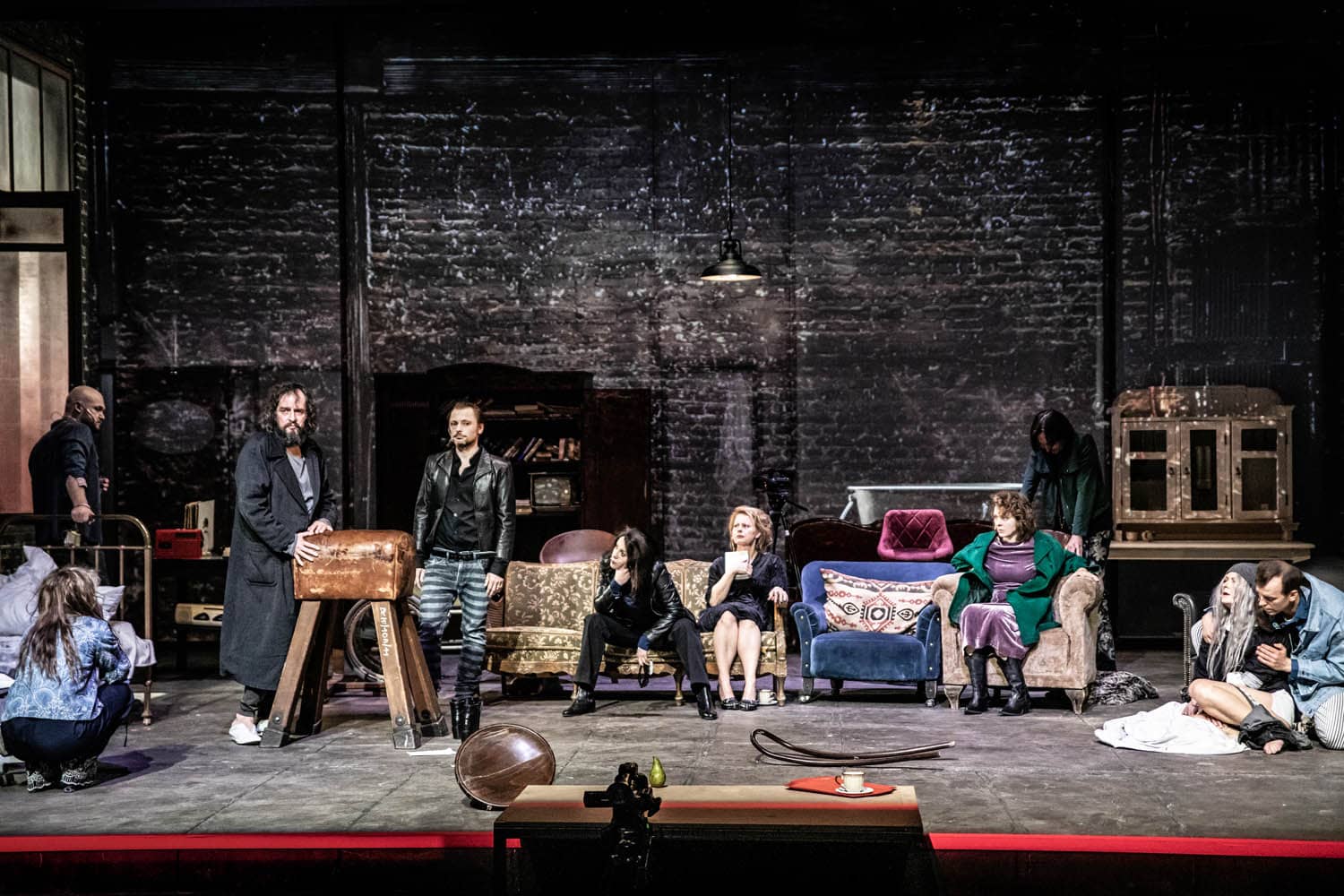 The show is realized within the “Prospero. Extended Theater” international project, thanks to the support of the “Creative Europe” program of the European Union.

Who is Krystian Lupa?

The Polish director, dramaturg and pedagogue Krystian Lupa is undoubtedly one of the great protagonists of the European theatre scene. He is a master at creating internally coherent stage realities. He often translates and adapts the texts which he stages, simultaneously designing the scenery and directing these productions. The quality of Lupa’s theatre derives from strong acting, which is often deemed “invisible” or “transparent”, made so by actors who unite almost completely with the characters they play.

Imagine is an artistic journey into the world of counterculture, the times of identity and cultural revolution at the turn of the 1960s and 1970s, a reflection on humanity embodied by an extraordinary cast.

Krystian Lupa used the lyrics of “Imagine” by John Lennon as a starting point and he asks a question about the liveliness of utopias in today’s world, in which spirituality has become commercialized or politicized and humanistic values, human rights, equality and personal freedom have been devaluated.

The director comes back to the psychological and spiritual New Age phenomenon and the life and creation of John Lennon, who as a “new Christ” of the hippie era suggested imagining a world without wars, countries and borders, without hate and ownership, but also without religion.

Do New Age visions sound purely naive in our times? Is faith in an endless evolution of humanity and metaphysics a fantasy or an eternal need of mankind? Why did the pacifistic idea fail so quickly in the 70s? Does the need for a spiritual transformation enhance in times of a crisis?

Extracts from Krystian Lupa’s journal
There is a wake, or maybe it is just a meeting of old dreamer friends that is like a wake?… One of us prepared aPERFORMANCE for this occasion… LET’S TELL EACH OTHER EVERYTHING THAT WE COULD HAVE DONE AND THAT WAS ABANDONED…

Lennon’s death met with the beginning of the end of the New Age in a peculiar way and for a decade it had a religious dimension. Lennon, drawn to America with New Age, with pacifism growing like moss during the Vietnam War led by our fathers, „the living dead of an old humanity” →he became or wanted to become, even for a moment, a Warholian 15 minutes, a face, a deity of the New Age…

Who are the people at this wake that may have never met or maybe they were friends only by the affinity of their dreams…? Andy Warhol, Thomas Bernhard, Caspar Hauser, Carl Gustav Jung, Sylvia Plath, Albert Einstein, Marilyn Ferguson – the media and creators of new human’s visions… This is only a group of random names initiating the search of a mental and literary matter entwining or penetrating this topic…

It won’t be about a dream, nor dreamers. Not about John Lennon, nor The Beatles. Although the wake might have a connection to his (John Lennon’s or his mythical double) death → with the shot of a revolver under the doors of Dakota on the outskirts of Central Park and the symbolism of Strawberry Field…

NEW AGE is not a sect of dreamers →Jung’s Platonic month is not a „golden flower” of a dreamer →though, of course, in these visions and visionary ideas there is a dream of a human as a basic religious → cultural→ creative matter. Mathematics is also a creation of a dreamer… So is speculative thinking… philosophy… et cetera… The idea (and its initiation) are indispensable to save the planet.

Are we able to answer why that faith in the transformation of humanity died? Is it possible to generate a second wave →a religious one, of the human community without faith in individual immortality?

An Extract from an interview with Krystian Lupaby Witold Mrozek, Gazeta Wyborcza
I don’t know if it is a performance about utopia. Maybe it’s rather about the necessity of thinking, which is often called utopian, especially on this side of the „barricade”. I can’t imagine that it will be at least possible to save our planet from an ecological catastrophe without faith, or an idea one can believe in ardently. I don’t believe that it will happen due to politicians’ decisions, conferences, or climate symposia. I don’t believe, that the politics of money and business will take such action. I also don’t believe that manifestations of activists will have that power. What was said in the previous, counterculture era, what the New Age generation was talking about – faith in human transformation, the transformation of spirituality, the “Age of Aquarius” – it all collapsed in a way. Together with the message of humanism, tolerance, ecology. It died in people – a fear of losing their old ways of life, old God, old values was born – „God, honor, homeland” – national provincialisms that we waste 90% of our energy on. Until that process – the process of a deep human transformation, the transformation of thinking, paradigm and archetype – is reborn, it will be impossible to win with the phantom of a global catastrophe.

Maybe we need to tell ourselves that the planet should be our new homeland. Or maybe even our new God?! Perhaps then a new, humanistically thinking person will be born – and not a national patriarchal one. A human that believes only in the rational paradigm, that only exploits, only wants power – is not able to save our lives on this earth.

We are making a show about how certain views, ideas, and intuitions that we filed as “utopian” may be necessary for us to survive the next 50 years.

Who is Krystian Lupa?