A new ‘encounter’ between Anagoor and the poetic word, that of Andrea Zanzotto, with whom they share suffering from devastation and tenacity in renewing the flame of arts only seemingly unheard.

In Italian with English surtitles 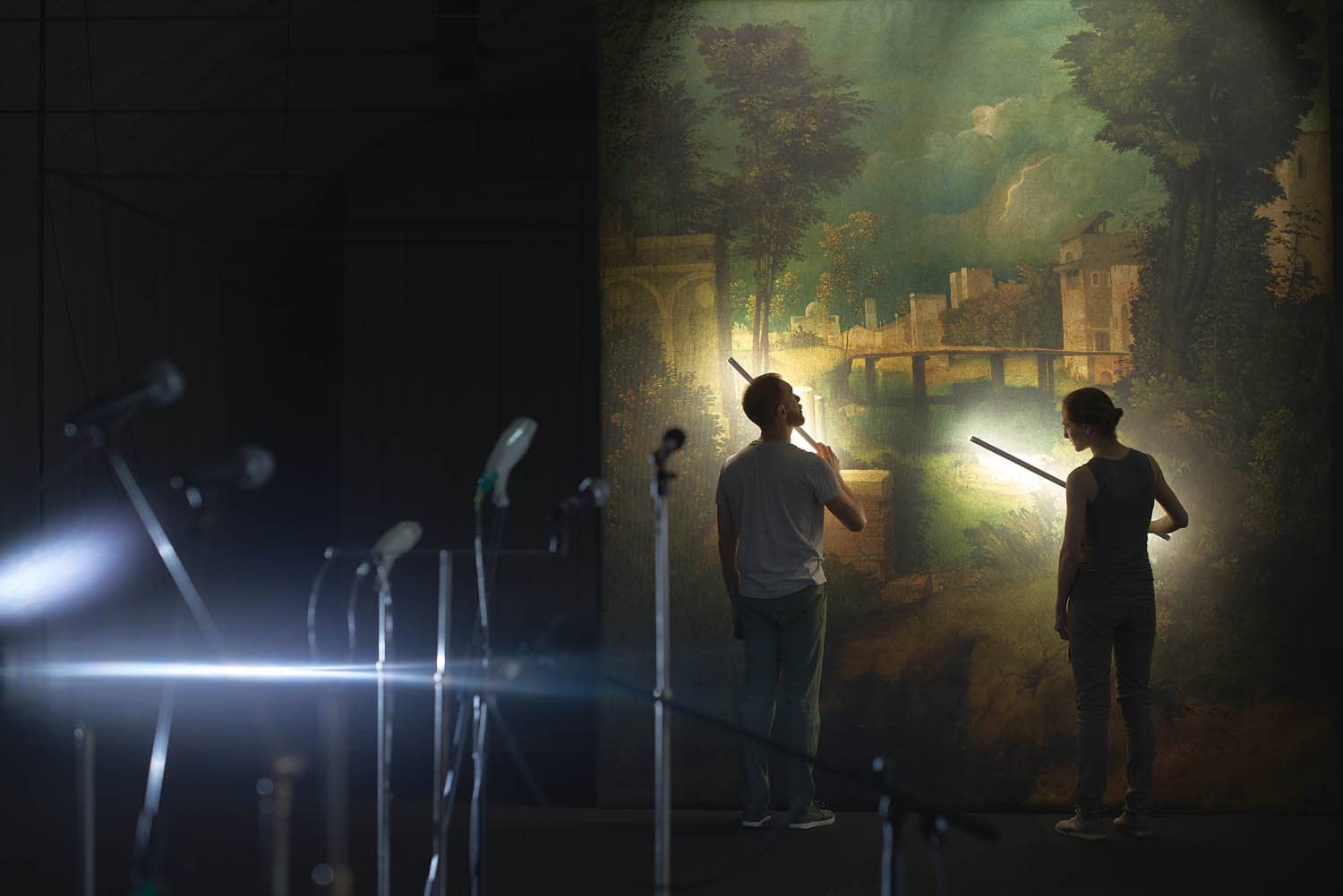 The scene hosts an evocation of the opera Wood #12 A Z courtesy of Francesco De Grandi.

Anagoor, in just a few years, has caught the attention of Italian and European theatre. In 2018, the Company was awarded the Silver Lion for at Venice Biennale and others prizes In Italy and abroad. The company has worked in depth for its research into a new language, borrowing from images and symbols that lead back to our cultural memory.

The Company has always cared about the relationship between politics, language, natural environment and landscape: it does so by convening different languages on stage, a Babel of arts (from visual arts to poetry) in an effort to tell the real and its fractures.
This new work continues the scenic investigation on the poetic word. While never explicitly mentioning it, Anagoor has long embraced Zanzotto’s lesson, many are the analogies that link it to the poet: the radical choice to observe history from the outskirts without this position implying closure and entrenchment, the complex relationship with the tradition and with the canon that determines a stubborn inactuality, the suffering for the devastation, the tenacity in renewing the flame of arts only seemingly unheard.

«This new work’s title alludes to the collection of verse IX Eclogues that Andrea Zanzotto published in 1962. The poet from Pieve di Soligo out of modesty chose to stay one step back to the shining Virgil and to the ten eclogues of the Bucolics.
Today, however, we can discern in the entire Zanzotto’s work the realization of a poetic chain that from Virgil (to Dante, to Petrarch, to Hölderlin, to Leopardi, to Pasolini, to Celan… transiting and reviving bridges from poet to poet) leads the flame beyond. Not a race among poets, but a relay race: so, the tradition is submitted to the bitter endto put themselves at greater risk than their fathers, to be in precarious balance between the aura of the past and the disenchantment poetry faces within this capitalist society.
Zanzotto seems to collect all the witnesses, all the light signals from the past and, spotting forward the indecipherable signs of the future light, he lifts and waves the lantern in the night of the present making himself Virgil for us all.
At once both ultramodern and age-old, Zanzotto is well aware that literature is like a choir of deads’ voices. However, the ultra-modernity of an age-old man that connotes Zanzotto, is not a purely literary datum, and the superimposition of the Bucolics to their own landscape, their own language, is never flat literary memory, but perception of an irreparable rift between those who are by now “versed in the two-thousands” and that long-lost world. This awareness coincides and extends in conscience of the fault you walk on that is a paleontological concept than a historical-cultural one: we can no longer speak neutrally about tradition, ignoring that the centuries between us and Homer are, but a speck of dust compared to the dizziness of biological, geological and, even more, astrological time.
Zanzotto captures and illuminates the hell into which we are lowered yet stubbornly holds the fire of a childlike hope.
His entire work reveals a complex and shimmering nature, elusive but not obscure: the landscape poet, through the vision of the devastation of the landscape and the crisis of the inner landscape, of the psyche and language, grasps and connects the causes and effects of a pain that makes dumb, soon rising as a civil and historical and even metaphysical force. It’s here that the achievement of the master is manifested: the whole Zanzotto’s work as a new eclogue, beyond Virgil’s ten, speaks the future voice of prophecy and renews the vision of a child who will come and smile at his parents.
A subtitle accompanies the main title “a presumptuous tribute to the great shadow of Andrea Zanzotto” exactly as the IX Eclogues had been defined by Zanzotto himself “a presumptuous tribute to the to the great shadow of Virgil”: we thus recognize as inevitable the flaw compared to an immense work and (however love-driven) arrogant any attempt to define it.”
Anagoor