The Italian company Kepler-452 tell us the story of the encounter with a group of metalworkers in an occupied factory, together on stage.

Capital
A book we haven’t read yet

In Italian with English surtitles 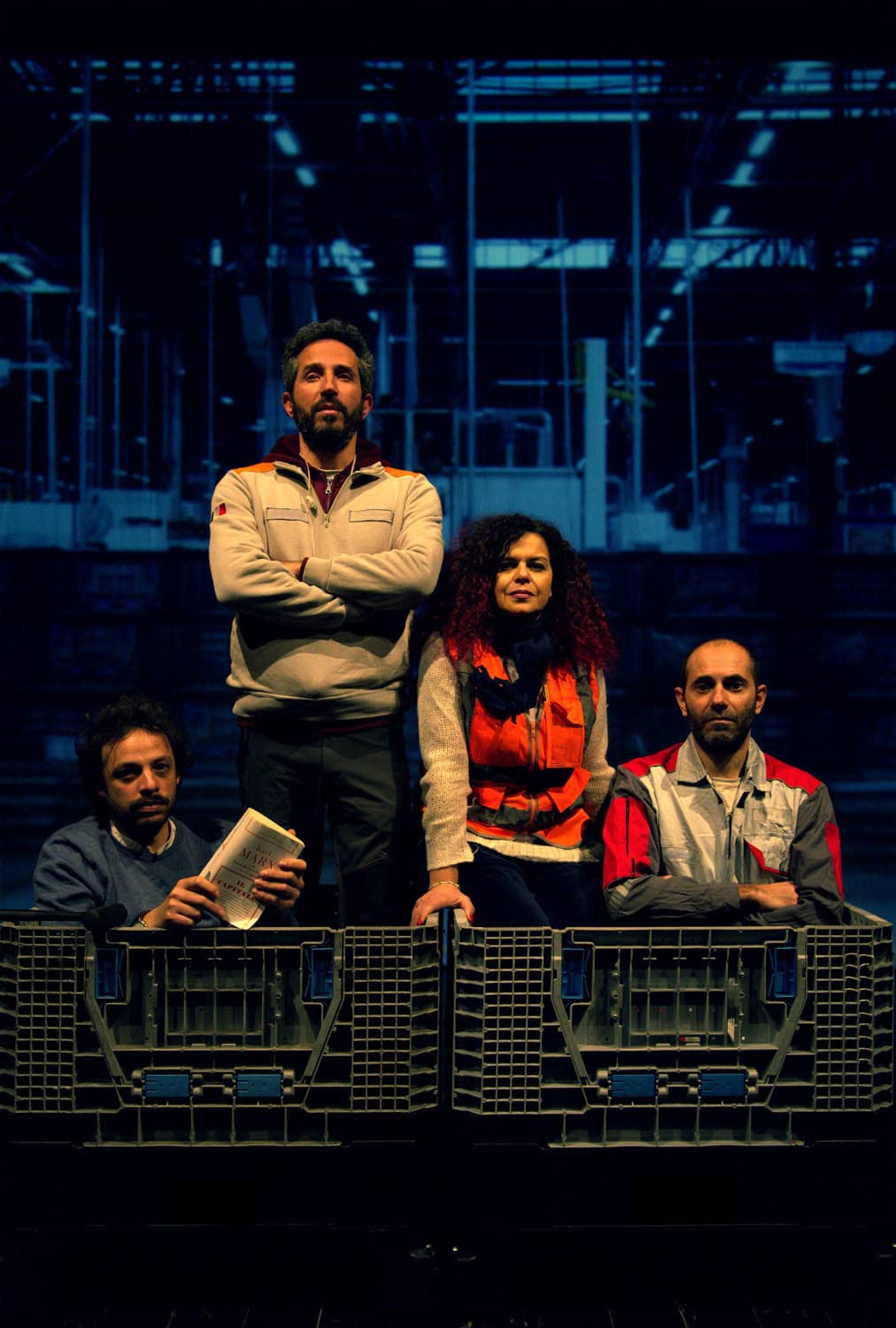 Kepler-452 was born in 2015 in Bologna to give life to a theatrical research characterized by a strong interest in the relationship between theatre and reality, towards the “outside”, towards what exists beyond the theatre. A theatre company that decides to stage Capital by Karl Marx.
The decision arises from the strong need, after the end of the first lockdown, to listen to those who, in the immediately following phase, would have lost their job. The decision arises from the strong need, after the end of the first lockdown, to listen to those who, in the immediately following phase, would have lost their job. The two directors thus decide to travel around Italy in search of those places where the pages of Marx become people, places, events. They talk to Sikh farm workers, logistics workers, grassroots trade unionists. One day they end up in a factory, the GKN in Campi Bisenzio, which has just closed. On a summer morning 2021, July 9 to be precise, the 422 workers who work there receive an email: they don’t have to go back to work the next day, they are fired. From that day on, the workers have occupied the factory, organized a canteen, a propaganda office, guard shifts, to prevent it from being dismantled. The first days of autumn the company enters the GKN for the first time. The workers invite them to eat the wild boar with them. The company accepts and asks if they can stop and live there for a while, to collect material for a show called Il Capitale, inspired by the homonymous book by Karl Marx. The workers say yes. From that day, throughout autumn, they sleep there, inside the occupied factory, on cots. They also earn a nickname (everyone in the factory has one), linked to their constant presence and the number of questions they ask to the workers in the garrison: those of the DIGOS (Italian enforcement agency for the investigation and special operations).
In the time they spend at the GKN, Nicola and Enrico interview hundreds of workers, participate in pickets, assemblies, demonstrations, listen, participate, observe, trying each time to return to the pages of Marx to try to establish a creative dialogue between “Capital” and what happens at the garrison, between a classic book of philosophical and economic literature and a group of human beings in flesh and blood. Then their attention is focused on three people in particular: Iorio, maintenance technician, Felice, assembly worker and Tiziana, cleaning worker, whom they invite to the theatre, in Bologna, to make a show together. Thus begins the creation of Il Capitale,, a show that tells what it means to spend twenty years in the factory making pieces, that tells about the differences between those who did it and those who never did it, about the extraction of surplus-value, about the closure of one factory among many, that tells of what happens when a group of workers decide to try to make history, of how for some time in an enclosed area of an occupied industrial plant, the logic of the capital is excluded. Of how the Capital, sooner or later returns to present the bill. Capital is also the story of the meeting between a theatre company and a group of metalworkers in the autumn of the Capital. Capital is above all a show about time, about its flow, about who owns it, about who sells it, buys it, frees it.